Posted on February 25, 2021 by Brian Wold
Share on FacebookShare on TwitterShare on PinterestShare on LinkedInShare on Email 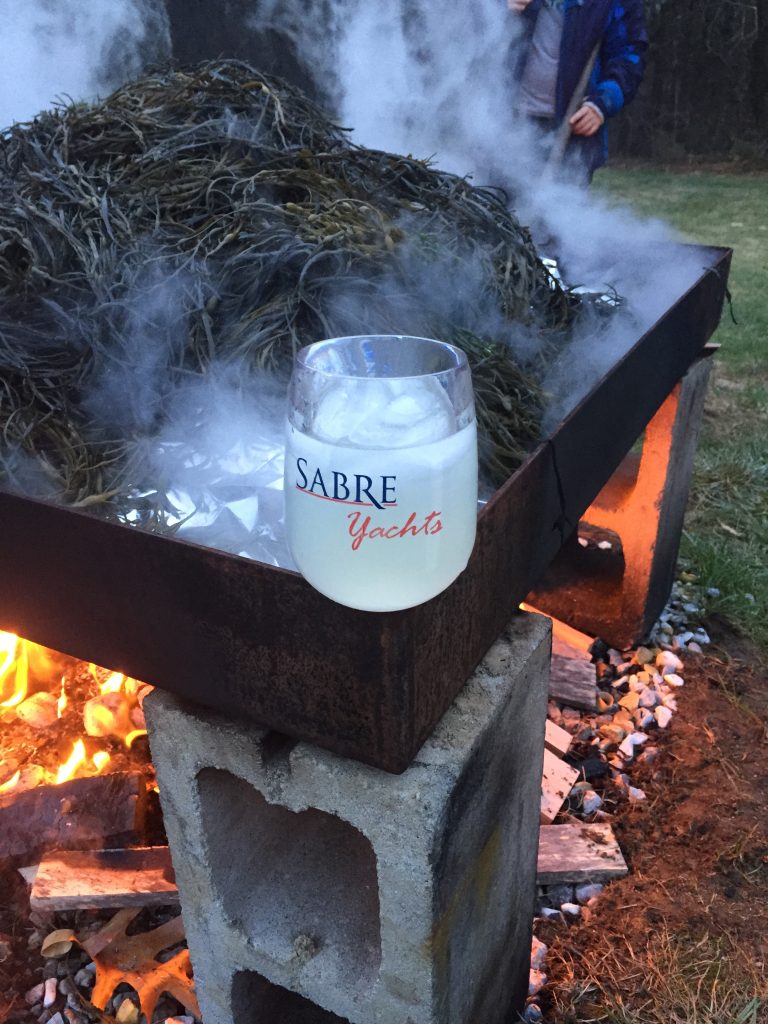 What’s the definition of a Maine clambake?

Some prolific writer would dream up a romance story combining the fresh bounties from the bay, local farms, Tyson Foods Corp. “Home of the Ball Park” beef franks, and the artist who skillfully blends all of these locally sourced ingredients to create a colorful feast for all to enjoy.   I have an easier but less colorful definition of a Maine Clambake (aka: bake), it’s a fun way to bring family and friends together while and eating some really good food!

My wife and I look for excuses to have a bake.  Any excuse from “it is the first day of spring,” to “Thanksgiving is over and Christmas is still two weeks away.”  Our most common excuse is “it’s Saturday, it’s summer, let’s have a bake!”  For generations (five that I am aware of), my family has been hosting clambakes in southern Maine.  Whether it’s in the backyard, on an island, or at the most photographed lighthouse in the country for the crew of the Coast Guard EAGLE back in the early 1970s, hosting a clambake is a family affair.  We all participate.  As our kids grow so does their participation.  My wife and I are proud of their excitement to carry on this family tradition. 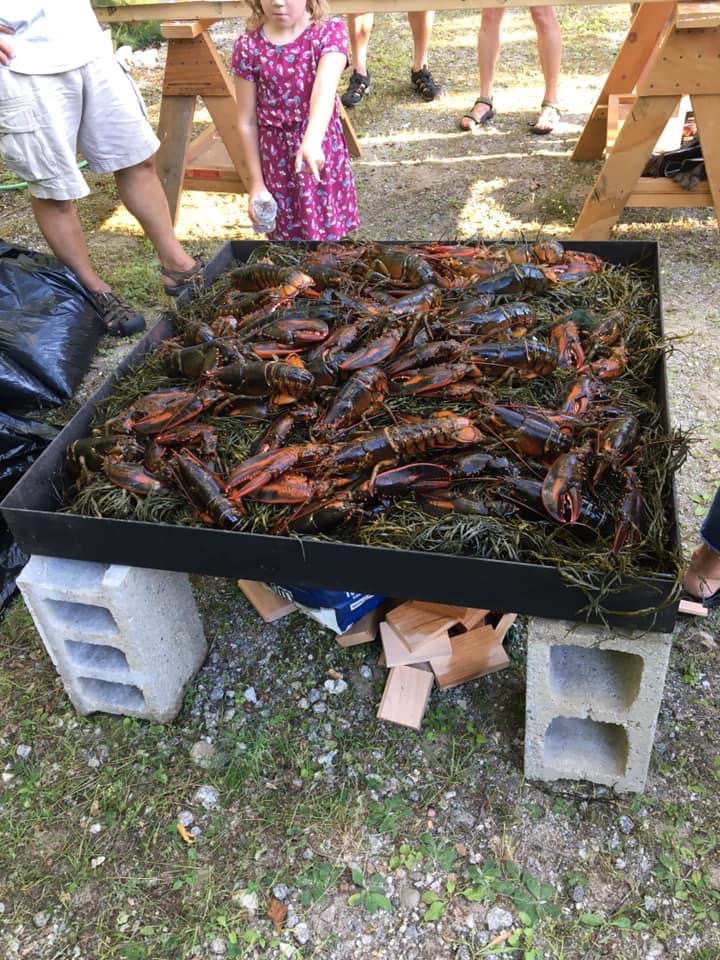 There is one important topic to touch upon before I describe the clambake experience.

Some people insist on referring to clambakes as “lobster bakes.”   If you use that term around me I don’t need to even look at your car’s license plate, you are clearly “from away,” and that’s enough said about that.

The essentials to a successful clambake are pretty straightforward as long as you have the basics on hand.  Listed below are the bare minimum requirements for a bake: 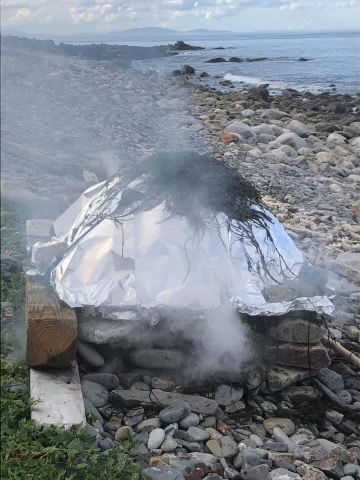 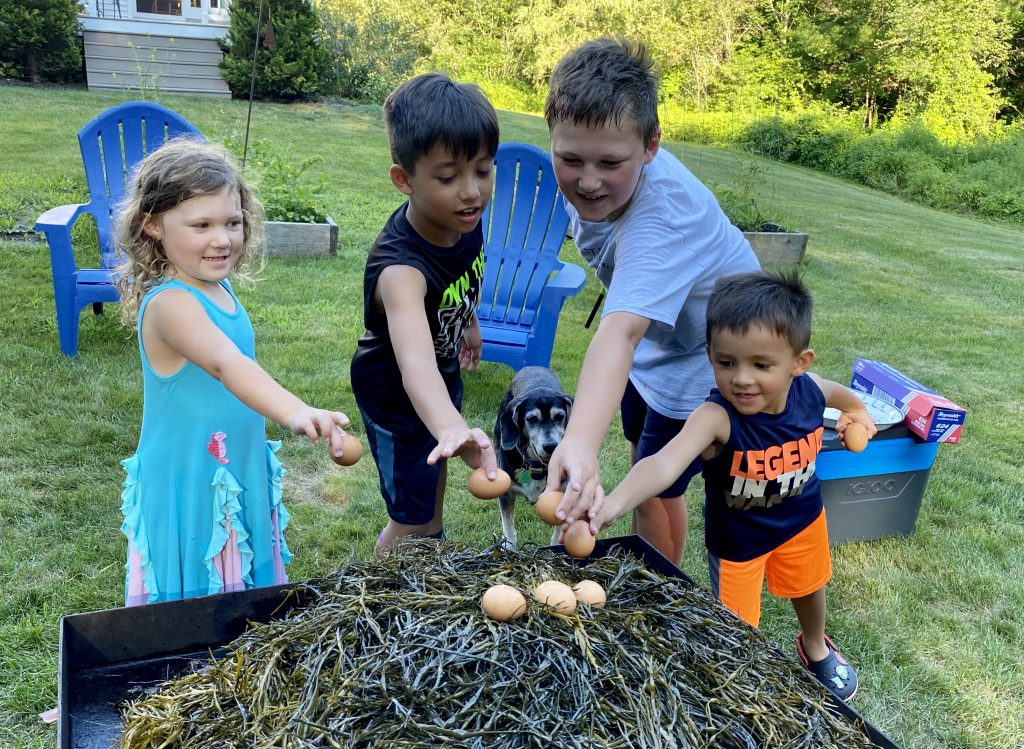 As clambake rookies (those “lobster bake” tourists) photograph the entire build process to post on to their Facecrack, Instantgram, Tweeter, or Tickle Tock accounts and brag to their virtual friends that they are at a bake, I broadcast a general request to real people for a drink.  Currently, my go-to is vodka with a few ice cubes and a lemon wedge (if available).   My request is usually fulfilled just as the fire is lit.

Lighting the fire has become my son’s favorite job. Drinking the vodka is mine.  Once the fire has reached the right temperature, in other words, it “looks good,” then I can relax more than I already have.  At this crucial junction of relaxation and cooking,  I will ask for a time check.  The rookies think this is important, but it’s not.  It’s just for show and to give them a meaningless responsibility which they believe is a real contribution to the success of the bake.

The real timing is measured in two different ways.  Remember I said above that vodka plays an important role in the bake’s success?  It’s one of the timers.  For me, it is a two-drink process, and a judgment call to know when the food is ready.  It is usually between 40-45 minutes.  When I am done with my second drink the bake should be done.  With that said, I always verify with the “egg timer”.  I am not referring to the egg timer found in the kitchen from days gone by.   I am referring to the eggs on top of the bake.  Wearing gloves for heat protection,  I reach into the top layer, pull out an egg, and crack it open on the plate.   If it is hard-boiled the bake is done.

It makes me feel like Santa in “The Polar Express,” holding up one of the reindeer’s bells and declaring it the first gift of Christmas. 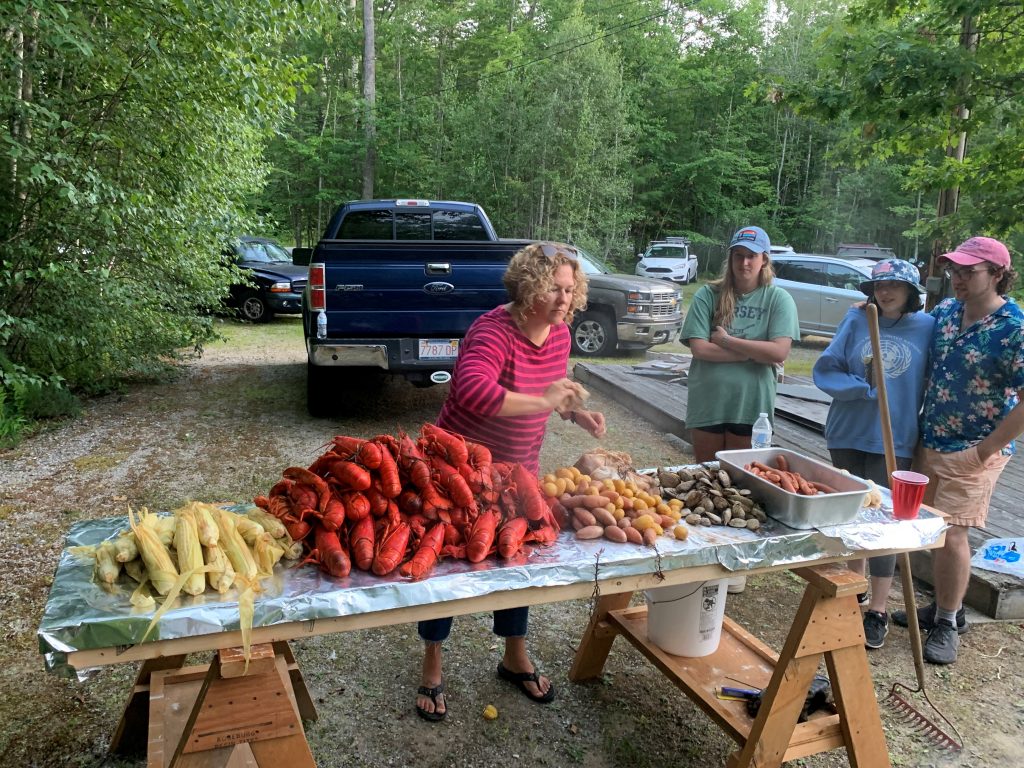 Next comes tearing down the layers and plating the food.

First to come off are the eggs.  Following that is the corn and Tyson Foods “Home of the Ball Park” beef franks, of which I always keep a few strategically behind.  The next layer is the stars of the show, lobsters.  Always a crowd-pleaser with the rookies and they can’t help themselves but take photos thinking they are going to win a Sony World Photography Award for a bunch of cooked lobsters on a bed of slightly chard seaweed.  The final layer to come off are the cheesecloth bags of steamers and potatoes.

As the guest start enjoying the bounties from the sea and local farms I find it heartwarming that, living in a small coastal Maine town, we are fortunate to be able to deliver a unique experience that they will never forget.  I usually stand by the empty clambake plate, now with just a small smoldering fire beneath, listening to the not-so-distant cracking noises of the lobster claws, laughter, and the occasional request for me to hurry and join them.  Little do they know, I am in my happy place.  It’s not because I’m satisfied with how successful the bake turned out or the smiles on their faces.   No, I am in my happy place because I saved a few Tyson Foods Corp. “Home of the Ball Park” beef franks for just me!

For myself, my wife, and our kids, hosting clambakes is family time that we cherish. 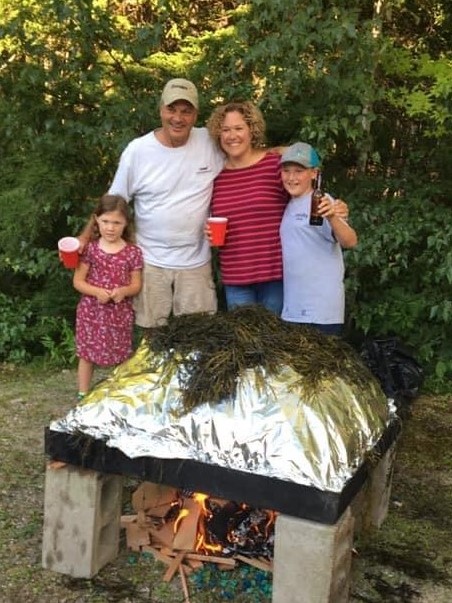 Special thanks to Tucker Thompson, for sharing his wisdom with the Sabre Yachts blog!

This entry was posted in Sabre Yachts Blog. Bookmark the permalink.